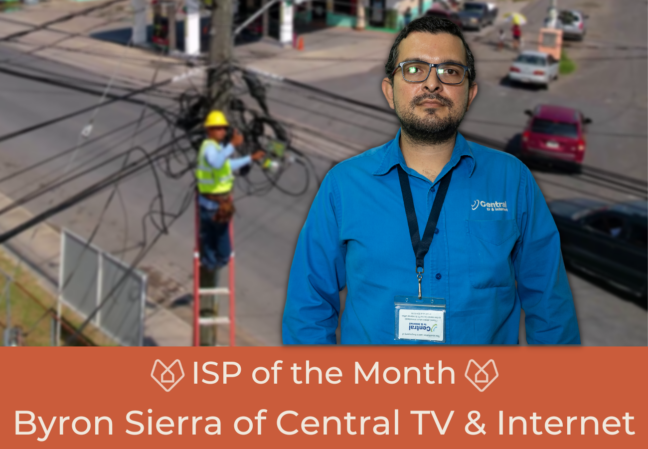 Byron’s interest in tech began when he was just 14. “My first choice was actually to become a doctor like my dad,” he explained, “but I found out pretty quickly that I don’t like to see blood.” Side-stepping blood-related work, Byron began taking apart old laptops from the hospital his dad worked at and putting them back together instead. “And I was really good at that, so that’s what got me started.”

Today, he takes pride in the work he’s doing at Central TV and Internet, specifically noting the company’s dedication to customer satisfaction. “Anytime a customer calls with any issue, we try to resolve it within 24 hours,” he explains. “But that has been difficult as of late because of the hurricane.”

On Wednesday, November 2, Hurricane Lisa made landfall as a category 1 hurricane near the City of Belize. With wind speeds of 85 mph, Lisa engulfed many areas in the region with 4 ft of water. “It mostly affected the Belize district,” Byron recalls. “It brought down a lot of lamp posts where our fiber was connected, so we had a lot of fiber down and services were down for a couple of days in the City of Belize.”

Since then, Central TV and Internet has been doing all they can to accelerate repairs and bring internet back to the area, even recruiting some of their 130 employees from other regions to speed up the recovery process. According to Byron, they still don’t have an estimate of the total dollar amount in damages caused by Lisa.

When asked what he enjoys most about working for an ISP, Byron spoke to the sense of fulfillment he gets from connecting people to the internet. “You’re basically in charge of the internet—you provide internet services to people and provide connection to resources and entertainment. It’s your job to ensure that they get the quality that they want.”

“It can be a pretty tough job,” he added, “since you constantly have to be monitoring for network outages, but it’s satisfying at the end of the day to know that people are able to do whatever they want using your connection.”

One of the reasons why Central TV and Internet began partnering with Vilo, according to Byron, was to ensure a more stable and consistent connection for their subscribers. “With the Wi-Fi mesh units we were using before Vilo, we would get customer calls about slow speeds and weak connections in certain areas. But since we started installing Vilos, we’ve stopped getting complaints.”

Byron discovered Vilo during this year’s WISPAmerica convention in Louisiana. “We were researching for Wi-Fi solutions that would meet all our needs and Vilo actually was the one that stood out the most,” he recalls. “So when we got to the show, [the Vilo team] was one of the first ones I wanted to talk to.”

The two things that immediately piqued Central’s interest was Vilo’s affordability and manageability. “We’re a small company, so we were looking for something affordable that, at the same time, works well, and Vilo works really well. Like I said, we had many complaints with our previous Wi-Fi units but haven’t heard any with Vilo.”

Since first partnering with Vilo after WISPAmerica in March, Central TV and Internet has deployed around 70 Vilos and expect an increase in deployment in the coming weeks. “Our main Wi-Fi units will be the Vilo mesh units,” Byron added.

“Being able to manage our Wi-Fi […] was one of the biggest things for us,” he said referring to Vilo’s ISP Management Portal. “Instead of having to send out techs to resolve issues, we can just go into the portal and see which device is connecting, which ones have low signals, etc.”

Central TV and Internet’s experience with the Vilo team has also been a highlight of their partnership so far, according to Byron. “We’ve had a great experience especially when it comes to support,” he says. “They usually answer me the same day, sometimes within hours or minutes.”

Lastly, having just received his samples of the Vilo 6, Byron is excited to try them out and voiced his interest in deploying them. “I’m pretty sure we’ll be requesting some boxes of the Vilo 6 so we can roll them out to customers!”