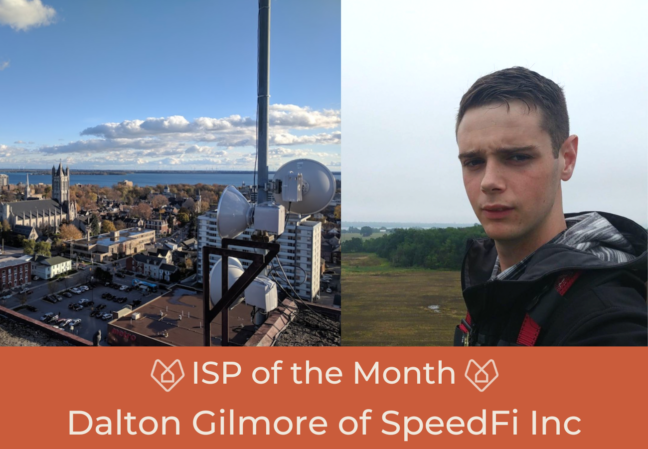 When Dalton Gilmore, 27, started SpeedFi Inc in 2017, it fulfilled one of his childhood aspirations. “It always was my dream to supply internet to people, honestly,” he says. “When I was 12 years old, that was my dream.”

Dalton grew up on a farm in the Manitoba province of Canada, where he opened his own computer repair shop, PC Mini Tech, when he was barely 16. “I didn’t know how internet worked at the time, so I started the computer repair store instead, but I always played with wireless stuff and loved it.”

As often as he could, Dalton would dabble in internet-related side projects, including providing internet to his childhood home and his family’s farm. “I also worked with a radio station and TV station back in the day, and they let me use their tower and equipment,” he recalls.

Dalton built the station’s dedicated links for their video-on-demand livestreaming before Twitch was even a thing. One of the most notable projects he was involved in was helping the local TV station broadcast a Safeway Select Curling game, which is a big deal in Canada.

SpeedFi Inc, Dalton’s WISP, was initially a subdivision of his computer shop, but come 2018, SpeedFi would incorporate PC Mini Tech. “I realized the computer business wasn’t profitable anymore because people throw things away so easily these days.”

Today, Speedfi Inc provides internet to 300 customers in and around the City of Kingston in Ontario, Canada. Daring to go where big-name ISPs won’t, SpeedFi serves several remote locations, including Wolfe, Howe, Simcoe, and Amherst Islands. Because of the challenging nature of their area of service, and since SpeedFi only has four employees in total, Dalton says he prefers to buy “very expensive equipment” while prioritizing integration and automation.

“So we deal with a lot of remote, frustrating locations where a lot of bigger ISPs don’t want to go. And I don’t blame them, honestly.” According to Dalton, a simple 15-minute service call to one of the islands can take several hours because ferry wait times can be extreme, thanks to the region’s high volume of tourism.

“We’ve had a service call before where a router died, and the one call took us 6 hours,” he says. “This is why having Vilo has been mission critical to us; we have to be sure the Wi-Fi routers we install work.”

Dalton first discovered Vilo at a conference in Ottawa in March last year and was skeptical because of the Vilo’s competitive price point. “I thought, ‘how can you sell a router at this price and expect it to perform?’ We had even just purchased some more expensive routers that we thought were better at the time, and it was one of those things where Vilo was about a third of the price of this other one, and I was like, ‘you know what? Let’s buy it. Let’s try it out.’”

Prior to putting Vilo to the test, Dalton had a Ubiquiti UniFi Wi-Fi system installed in his house. Despite having an access point (AP) on each floor, he was unsatisfied with the performance he was getting. “I would go outside, just 10 ft. away from one of the AP’s where my hot tub is, and I still couldn’t use the Wi-Fi.”

Hoping to finally stream TikTok’s from his tub, Dalton swapped his UniFi system with Vilo’s. “And it worked. The mesh worked seamlessly. I switched over to the Vilo network and was getting like 100 Mbps in the hot tub through my house’s metal siding and everything,” he recalls. “I was very shocked with the results, and I’ve had no issues with it.”

As SpeedFi relies heavily on automation and integration, Dalton has been making good use of the Vilo ISP Portal. “We are very happy with the ISP Portal, and like I said, I like to have everything tying in, and so being able to look at the dashboard and see device statuses, run speed tests remotely, to lock channels—being able to select channels—has all been huge for us.”

By April 2021, Dalton was deploying Vilo as SpeedFi’s Wi-Fi system of choice. “We’ve been pulling another vendor’s out like there’s no tomorrow,” he says.

“We’ve only had one truck roll involving a Vilo and it was because of bad power at the place—it cooked a lot of other devices in that house, so I’m not going to blame Vilo for that one,” he continues. “But I still get reminded, sometimes weekly, about issues with our other vendor’s routers where we have to do a truck roll and put a Vilo in.”

An Airbnb and a lot of profanity

Things can get hairy when you’re providing internet to islands, especially when Airbnb’s are involved. Just last week, Dalton found himself in one of the most frustrating situations of his ISP career.

One of his customers who runs an Airbnb missed their scheduled appointment for a Wi-Fi installation and told Dalton that he could send the Vilo in the mail, and they would set it up themself. A few days later, he found out it was never installed when he got a call from the Airbnb’s guests.

“There was a lot of frustration,” he recalls, “They couldn’t figure out how to install the app. It was constant profanity on the phone. It was next level! They couldn’t even figure out the password on the bottom of the router.”

To complicate things further, Dalton was unable to do a remote installation on his end as the particular Vilo system came from an earlier batch and didn’t have the latest firmware upgrades. “The customer was irate.”

“So I gave Vilo a shout and asked if there was a possibility to get this password since I had the serial number. I got a text message a half an hour later with the password. I emailed it to the client; I have not heard from them since. Clearly, we see bandwidth coming through, and they stopped calling the Airbnb owner every two hours.”

“So we followed up with the owner, everything’s good now. You guys helped us through that when I don’t know if any other vendor would have,” he said. “So yeah, working with the Vilo team has been amazing.”

Apart from providing internet, SpeedFi Inc has data center and consulting divisions. According to Dalton, they are aiming to deploy 5G networks soon, but are waiting for the Canadian Radio-television and Telecommunications Division (CRTC) to lay out their new spectrum. He also expressed his excitement for upcoming Vilo releases, including the Vilo 6 and API integration.