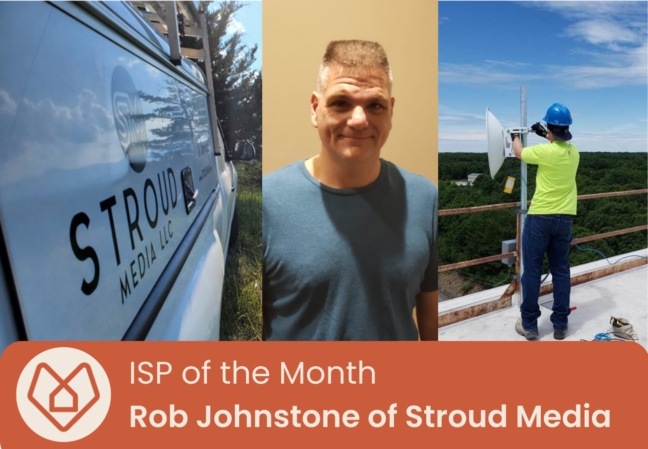 Rob and Jill Johnstone co-founded their Stroudsburg Pennsylvania-based ISP (Internet Service Providers), Stroud Media, in 2020. Today, they have more than 500 subscribers and even provide service to remote areas in Kingston, New York. Having only two full-time employees who primarily do installations and respond to service calls, Stroud Media is run by just four people. But according to Rob, their rag-tag team has an advantage over their big-name competitors.

“Our niche is customer service,” Rob explains. “We’ve gotten a lot of people that’ll tell us that they’re not treated very well by the local cable company—that they’re just a number to them.” When these same individuals discover Stroud Media, Rob says they’re immediately impressed by the quality of service.

“It’s hard to compete on price. It’s hard to compete with a company that’s ten times bigger than us,” he continues, “but we can compete in the area of providing excellent customer service and being able to not treat every one of our customers like they’re a number, and even going the extra step. And I think that’s where Vilo comes in.”

Stroud Media began replacing their Ubiquiti routers with Vilos in the summer of 2022. For Rob, who’s been involved in the wireless internet business since the mid-2000s and holds some of the top certifications in his field, it was imperative that he deployed a reliable Wi-Fi unit that could also be managed remotely.

“A big part of what we offer is the ability to remotely access our subscribers’ routers from our office so we can help customers without having to go out,” he says. “I think that’s where we excel and that’s one of the reasons why, when we found Vilo, we said, ‘hey, this is a product that fits in with what we want to do and what we want to offer our customers.”

Since they began deploying Vilo, Rob says he hasn’t received complaints or calls for service from his subscribers and that Stroud Media will be exclusively using Vilos moving forward.

From WISP to FISP

As of late September 2022, Stroud Media, a mostly wireless ISP, has begun building out their fiber networks. “We kind of made the decision to go move 100% in the next few years into a fiber-based network.”

As local cable companies don’t provide FTTH (Fiber to the Home), Stroud Media is the first provider in Monroe Country, PA, to bring fiber to both businesses and the home. Today, 30-40% of Stroud Media’s customers get their internet through fiber, including several MDUs (Multi-Dwelling Units).

“So, we’re starting to actively build fiber in a lot of neighborhoods, and we’ve installed a lot of fiber in the last two or three months. We’ve made a lot of good strides in getting our fiber up on the poles and getting it to a lot more of our customers.”

Challenges of transition to fiber

Any WISP (Wireless Internet Service Provider) switching to fiber knows the process is not without its potential kinks. Rob relayed to the Vilo team some of the challenges Stroud Media has faced when building out their fiber networks.

“I think the biggest challenge for us is permitting some of the poles and some of the engineering that’s required to get what they call the make ready done,” he explains, “which is basically when we want to get up on a telephone pole and say the cable company or telephone company has to move their cables to make room for us on the pole, so that has been our biggest obstacle.”

Regarding the wait time for completing all the steps involved, Rob says, “it’s probably three to five months from the time we say we want to put fiber on the pole to when we’re actually out there putting fiber on the poles.”

When talking about the shift to fiber, Rob mentioned his interest in trying out the new Vilo 6 mesh Wi-Fi system. “We’re definitely going to be getting some Vilo 6’s on board and playing them!”

Despite the sometimes slow-going process, Rob is optimistic about Stroud Media’s fiber-based future. “In the next year, we’re hoping to expand on the fiber we’ve already built and get into more neighborhoods,” he says.

“I always tell everybody if it was easy anyone could do it. In this industry, my experience is there’ve been a lot of challenges and hurdles you have to get over, but if you stick with it, it’ll turn out in the end.”