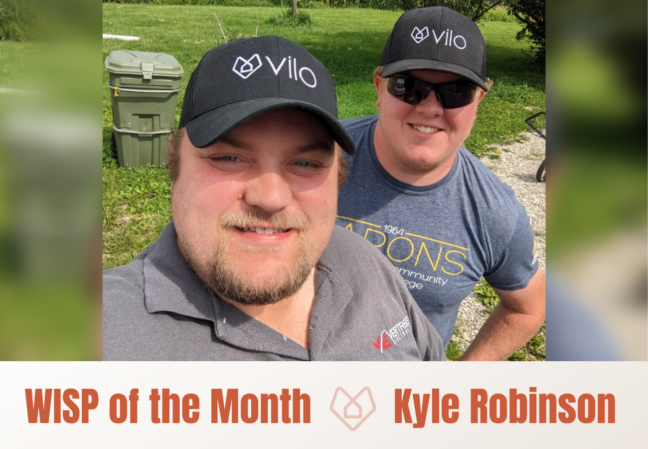 From microwaves to providing internet services

“The middle of fricken nowhere,” is how, Kyle Robinson, 28, describes Vertrees, Kentucky. He and his wife moved there from Bardstown, Kentucky, the Bourbon Capitol of the World, after getting married in 2016. Though he still adores the “itty-bitty” town, he didn’t love the slow internet speeds there when he first arrived.

“There was three megabit DSL provided by Windstream in Vertrees—absolutely horrible. I got really fed up with their poor speeds and I heard other complaints from my neighbors and everything,” Robinson recalls. “Prior to that, starting a WISP had never crossed my mind. Not once.”

With ten years of commercial two-way radio, microwave engineering, and I.T. experience under his belt, Robinson decided to research what it would take to start his own internet company. As luck would have it, a friend from his old two-way radio shop had started a WISP himself. “So I started talking to him like, ‘what does it take to start a WISP, man?’”

From that conversation, Robinson realized that starting a WISP would be easier than he thought. His first step was to find a commercial space to use for a data center and a head-in.

“I knew I didn’t want to run it out of my house,” Robinson said, explaining that in order to grow his business, he wanted to appear bigger than he actually was at the time. “It’s all about perception,” he added.

Luck would be on Robinson’s side again because, just as he moved into town, the school building next to him, which was already equipped with fiber cables, closed down and he knew the man who bought it.

“So I called him and I said, ‘Look, here’s what I want to do, man. I want to start a business. I know there’s fiber in there. I want to put equipment on the roof so I can shoot to some other sites. And I want to use the old [main distribution frame] and computer lab upstairs.’ And basically, he looked at me and said, ‘go for it.’”

After ripping out the building’s old I.T. infrastructure, taking out a $10,000 loan for new equipment, installing his own network infrastructure, and successfully connecting to fiber, Robinson was ready to provide internet. But for the first six months, he wanted to test the connection so he only provided internet for himself and his neighbor—who saw Robinson setting up a dish and jumped on the chance to be his first customer.

“So for about six months it was just me and one other person on it, and it worked fantastic,” he recalls. “And then, you know, my whole neighborhood found out what I was doing and it almost exploded overnight in that area.”

Within his first two months of officially opening Vertrees Electronics for business, Robinson gained 35 customers. Today, he has around 160 subscribers across 13 sites, covering nearly a quarter of Hardin County, Kentucky. Robinson attributes most of this growth to word-of-mouth advertising, having only spent money on some big bright yellow yard signs he posted around town and a few Facebook ads.

Robinson is also a huge proponent of running a personable and responsive business. “One thing that really sets me apart from other companies,” he says, “is if somebody calls me, it doesn’t matter what time of day, you know, it doesn’t matter if it’s after business hours—if I see a voicemail for me, I call them back because you never know what opportunity might be there today.”

Kyle Robinson became a partner with Vilo Living at the beginning of 2022 after his friend and fellow Kentucky WISP owner, John Gill, insisted he try Vilo’s Mesh Wi-Fi System. “So before Vilo, I tried every kind of router that existed for my customers. I mean, everything,” he says.

“We tried TP-Links. We tried MikroTiks, and I never could find a good balance of something that was manageable from my end perspective of things, that was easy for me to set up [and] easy to pass control to the customer. And the biggest thing people want now is parental controls and things like that to turn off their child’s devices.” Robinson remembers wishing there was a set up similar Comcast’s Xfinity Home custom cable design but for WISPS, and that’s when Gill helped him discover Vilo Living.

“And from the first time I tried Vilo, I was like, ‘Okay, this is all I’m buying for my customers.’ And now, this is the best thing since sliced bread,” he says, adding how easy Vilo’s system is to set up and manage. “I went through and ripped every old router out of any customer’s house and replaced them with Vilo—every one.”

Robinson gives all his customers their first Vilo unit for free and gives them the option to expand by selling them additional routers should they need them. The option to expand combined with Vilo’s app and remote management system has made “all the difference in the world” for Vertrees Electronics.

The ability to collaborate with Vilo on new features has also been a highlight of Robinson’s experience with the brand. “Vilo is the first company I’ve ever worked with in any industry that, when their users give them suggestions, they take it to heart and implement the suggestions. They are the first company I’ve ever worked with that you can say, ‘We want to see this feature,’ and boom, they have it implimented within just a few months time.”

Vilo Living isn’t the only product that has made a world of difference for Robinson. He also swears by Gorilla Ladders—ladders that have A-frame and extension functions. Robinson was able to replace four different ladders with one 18’ Gorilla Ladder. “It has literally just made my life so easy,” he grins.