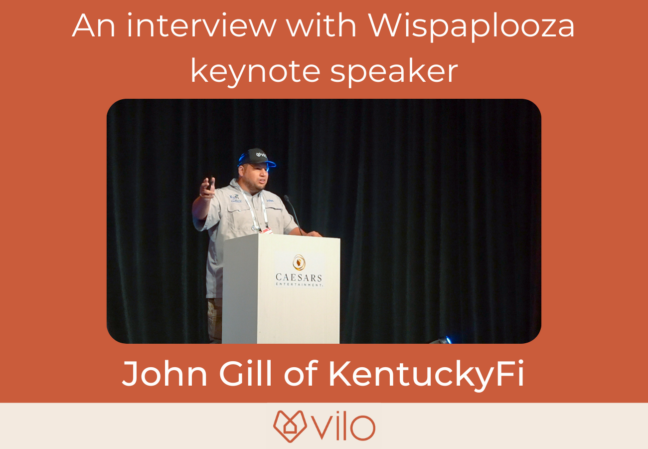 On the last day of this year’s convention, Wispapalooza keynote speaker John Gill presented his success story. “In one year, I went from square feet to now I service over 50 square miles of coverage,” he began, recalling how his WISP, KentuckyFi, blossomed in just twelve months. Today, he has 75 customers and covers more than 900 homes. John was invited by WISPA Director of Communications Mike Wendy to share his WISP journey at this year’s convention.

During an interview with the Vilo team, John reiterated the central message of his presentation: “For anyone who is thinking about [starting their own WISP] and is scared that fiber’s going to beat them or anything like that—do it. Just go ahead and do it.” This enthusiasm comes from his own experience starting KentuckyFi. John is adamant that anyone can achieve similar success by utilizing online resources, seeking support from the WISP community, and making partnerships with companies that listen.

John’s own ‘just do it’ attitude is partially inspired by the fact that anyone can learn just about anything thanks to online resources like YouTube. “There’s tons of YouTube videos out there,” he said during the interview. “It’s just like nowadays, there’s a lot of people working on their car while they’re watching YouTube and turning a wrench. That’s the same thing that’s happening with the internet providing side of things!”

KentuckyFi isn’t the only WISP that came to life thanks in part to the knowledge available on YouTube. In last month’s ISP feature, Chief Se’khu Hadjo Gentle of RedFi Broadband shared how he watched YouTube videos to improve his internet providing capabilities too. And if you are ever unable to find what you are looking for online, the WISP community will have your back.

While John was admittedly nervous at the time of his presentation, he was excited to give back to his fellow WISPs who’ve supported him since day one. “I’ve worked for other businesses in the past where there’s been so much competition, so much head-butting. With the WISP industry, it’s completely different,” he said.

“If [your network] goes down for whatever reason, whether that be mother nature or your own accord, you’re a phone call away from getting it back up. There are people in the WISP industry who just love helping each other out.”

During his Wispapalooza address, John referred to companies like Vilo as “tools in [his] toolbox.” Whether it be Vilo or some other company in the industry, the most crucial part of any partnership, according to John, is the company’s ability to listen.

“One of the reasons I continue to work with Vilo is that they’re doing so much in the market of listening to us WISPs. You tell them what you need and they’ll work to get it to you in the next release. It’s kind of like what we’re doing for our customers when we go to a customer’s house,” he continued. “The customer wants a satisfying product, and Vilo does the same thing for an ISP.”

John cautioned against working with larger companies as they are more likely to be “set in their ways,” and care more about making “the biggest profit margin” than helping smaller ISPs. After noting the symbiotic relationship between WISPs and companies like Vilo, where helping one another achieve is in the best interest of both parties, John said, “That’s what Vilo is all about—helping you win.”

Circling back to his tool analogy, John also suggested never deleting industry contacts. “If you’ve ever seen a mechanic, they have these huge toolboxes. I see contacts, email addresses—I see all of that as tools in my toolbox,” he explained.

To conclude his presentation, John recalled how when he first started his WISP, a Windstream representative looked him in the face and told him, “You don’t know what you’re talking about.” When asked if that person thinks he knows what he’s talking about now, John laughed, “well, his technicians are telling their customers about KentuckyFi now, so I’d say so!”