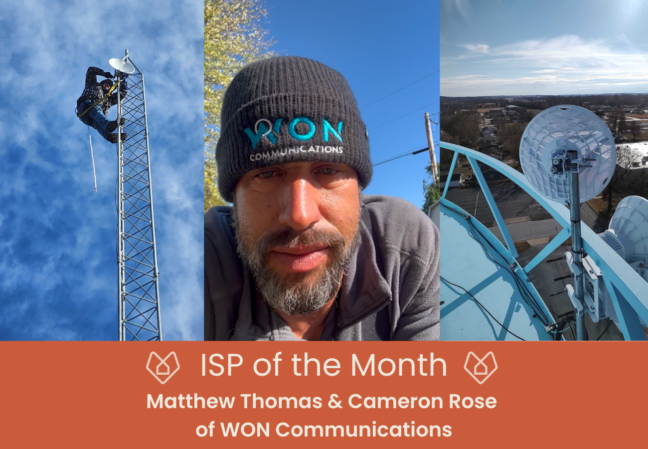 “They enforced their trademark and wanted us to stop using it. So, when we merged the two companies, we just turned it into an acronym, and that’s where WON Communications came from.”

The name is suiting, according to Matthew, as WON (pronounced “one”) keeps things simple for their business and residential customers by providing a single point of contact. “[O]ne phone number, one invoice – hence, the ‘WON’ of WON Communications,” he says.

Self-taught from the Days of Dial-up

Matthew earned degrees in electronics and industrial management from Missouri State University and is a “Distinguished Alumnus” of Ozark Technical Community College. Despite not having any formal networking experience, though, he jumped into the internet industry in the early 2000’s.

“I just taught myself everything I needed to know,” he says. Matthew’s first internet-related experience was setting up Wi-Fi in his house back in the day when dial-up was the standard.

“I went and bought one of those Linksys WRT54G Wireless-G Routers, the black and blue ones you can get from Walmart,” he recalls. “I tried figuring out how to use it—taught myself how to set the computer up as a proxy for the dial-up that was coming in so I could take dial up and send it out as a Wi-Fi and try and use the Wi-Fi throughout the house.”

After that experience, Matthew began setting up Wi-Fi for apartments and hot spots. He even landed a city gig providing Wi-Fi to buses. Those experiences led him to starting his own ISP around 2005 called U-Link.

In the mid 2010’s, Matthew met Cameron Rose, whose background was primarily in construction, while they were shopping for internet equipment at the same forum. “We met up and had this shared vision of starting a project in the downtown Springfield area,” Matthew recalls. The two of them started Wide Open Networks shortly thereafter.

They divvied up ownership according to the Slicing Pie operating model, which provides a template for owners where equity splits are fluid according to how much time and resources each respective owner puts into the business.

“We didn’t have to argue over who owned how much of the business or was putting in the most time and all that kind of stuff,” says Matthew. “What that unique model let us do was, as long as we recorded how much time and resources we put into the business, the business ownership dynamically adjusted.”

The Slicing Pie approach was so successful for Matthew and Cameron that they recommend it to anyone looking to go into business together. “It’ll take away all the confusion [surrounding ownership],” Matthew added.

WON Communications and Quality Over Quantity

After Wide Open Networks began earning a positive cash flow, Matthew and Cameron incorporated Wide Open Networks with U-Link to make WON Communications in 2015. With the merger, WON had about 700 subscribers in their first year of business. Today, they serve around 1,330 subscribers in Springfield, Missouri and the surrounding areas; as North as Humansville and as South as Chadwick.

Pointing to the 5.0 customer review rating on WON’s Facebook page, Matthew explains how their focus is more on quality than quantity when it comes to growth. “We prefer to put time and effort into upgrading our network and taking care of existing customers before we run out there and try to just grow the network like crazy,” he says.

“Vilo solved a lot of our problems”

To further emphasize quality, WON began deploying Vilo mesh Wi-Fi systems earlier this year. After meeting some of the Vilo team at WispAmerica, Matthew tried some of the Vilos out. Much to his relief, the Vilos maintained coverage and didn’t require multiple reboots a day like the Cambium systems they had previously deployed.

“Vilo solved a lot of our problems, plus, they provided a mesh solution for some of these larger residential homes, and they just made sense, so we jumped in with Vilo and it’s just been great ever since,” says Matthew.

A staff member on WON’s support team estimates that they’ve already seen a 50% reduction in support calls since deploying Vilo. Matthew also loves that his support team can access network insights with Vilo’s ISP Management Portal. “It gives us all the information we need,” he added, “which has helped us out in situations that’ve been pretty tricky for us.”

Speaking about the Vilo Mesh Wi-Fi systems, Matthew says, “the Vilo maintains and supplies a good through-put for the standard 1200 to 1500 sq. ft. residential. The stuff stays on and works, we haven’t had problems with them rebooting.” For larger residential spaces, WON will install a sub Vilo for an additional $5 a month.

In closing, Matthew stressed the importance of having reliable equipment, like Vilos, in the customers’ homes. “Customers think that Wi-Fi is the internet. It is to them,” he explains. “And if the Wi-Fi doesn’t perform well, you’re the problem. It’s a straight line to the ISP. Understanding that is important for customer retention.”